Sir David Pountney CBE became internationally known through his production of Katya Kabanova at the 1972 Wexford Festival. Between 1975 and 1980, he was Director of Productions for Scottish Opera. Productions there featured a Janáček cycle in collaboration with Welsh National Opera. He directed the world premiere of David Blake’s Toussaint in 1977 (ENO) and went on to become ENO’s Director of Productions in 1980, directing over 20 operas, and took a leading part in making ENO a powerful engine of radical theatrical experiment. He has directed over 20 world premieres, including three by Peter Maxwell Davies for which he also wrote the libretto, and has translated operas into English from Russian, Czech, German and Italian. He continues to be an enthusiastic libretto writer.

As a freelance director, future plans include return visits to Leipzig Opera for Meistersinger, Magdeburg Opera for Figaro Gets A Divorce and Israel Opera for a new production of Le Nozze di Figaro. Recent previous engagements include a new Ring Cycle for Chicago Lyric, Un Forza di Destino in Lisbon and The Cunning Little Vixon, Rossignol and Bluebeard’s Castle all with Welsh National Opera. The 2018/19 season included Charodeika at the Mariinsky Theatre in St Petersburg, Manon Lescaut at La Scala Milan and The Passenger and Simon Boccanegra both for Israel Opera Tel Aviv.

Further previous engagements include Saul og David in Copenhagen, The Passenger (Houston, New York and Chicago); Kommilitonen, his third opera written in collaboration with Peter Maxwell Davies (Royal Academy of Music and US premiere at the Juilliard School, New York); a new Philip Glass opera, Spüren der Verirrten, for the opening of a new opera house in Linz which won the Schickaneder Prize for best opera production in 2013, and Die Zauberflöte for the lake stage in Bregenz, where he was Intendant from 2003 - 13.

From 2011 to 2019, David was Artistic Director of Welsh National Opera where he directed Berg’s Lulu, Rossini’s Guillaume Tell, Mosè in Egitto, Pelléas et Mélisande, In Parenthesis (world premiere), Elena Langer’s opera “Figaro gets a Divorce.” (world premiere), Un Forza di Destino – the start of a Verdi trilogy and last season Janáček’s House of the Dead which they also took to the Brno Festival in the Czech Republic.

He has worked regularly in Zurich, at the Vienna State Opera, Bayerische Staatsoper as well as opera houses in America and Japan. He received a Janáček medal for his Janáček cycle in Wales and Scotland, and a Martinů medal for his productions of Julietta and Greek Passion (Opera North and Bregenz Festival). His productions have twice won an Olivier award.

Sir David was knighted for services to Opera in 2019, he is a CBE, a Chevalier in the French Ordre des Arts et Lettres, has the Cavalier’s Cross of the Order of Merit of the Republic of Poland and was awarded the Ehrenkreuz des Bundes Oesterreich in 2014. Sir David was also awarded an Honorary Fellowship of the Royal Welsh College of Music and Drama and Cardiff University in recognition of his contribution as an artist and cultural leader and an Honorary Fellowship of the Royal Philharmonic Society, an honour shared with Verdi, Wagner and Sondheim. 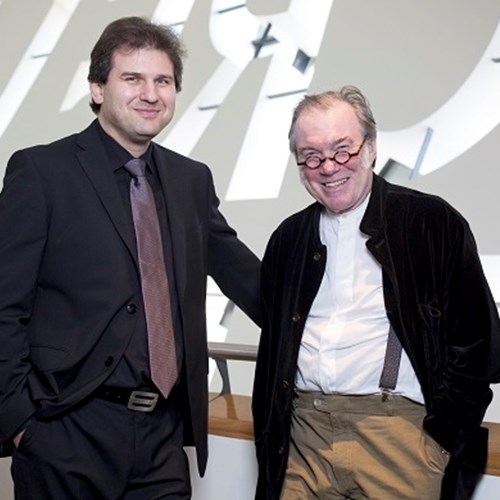